If you and your housemates are looking for something fun and hilarious to do, consider channeling your favorite TV family, aka the Rose family. Find some inspiration first by marathon watching Schitt’s Creek and start a chat collecting everyone’s favorite GIFs from the show. Then, make your favorite characters come to life by recreating these Schitt’s Creek TikToks with your housemates for a little bit of fun.

You and your roommates are sure to be LOLing over the hilarious antics of David and Alexis. You will most likely not be ready to say goodbye to the show quite yet, and neither can TikTok. Grab a martini glass and put on a posh accessory to channel your inner Moira. Or, gather up your housemates to stage a round of #SchittsCreekImpressions and let your followers vote on who did it best. If you can decide on a favorite scene from the show, you can also recreate it. Have your housemates dress as their fave character and act out the lines to make a Schitt’s Creek TikTok of your own.

Not only will you and your crew make some hilarious moments together by roleplaying these Schitt’s Creek scenarios, but your followers will also have some laughs when they see your creative videos. Get out your best diva face, because the camera’s on you this time. Whether you’re rocking a little bit Alexis-like dance or an expression that says, "Ew," you’ll have a blast making these Schitt’s Creek TikToks.

1. This TikTok Imagines The Characters In Real Life 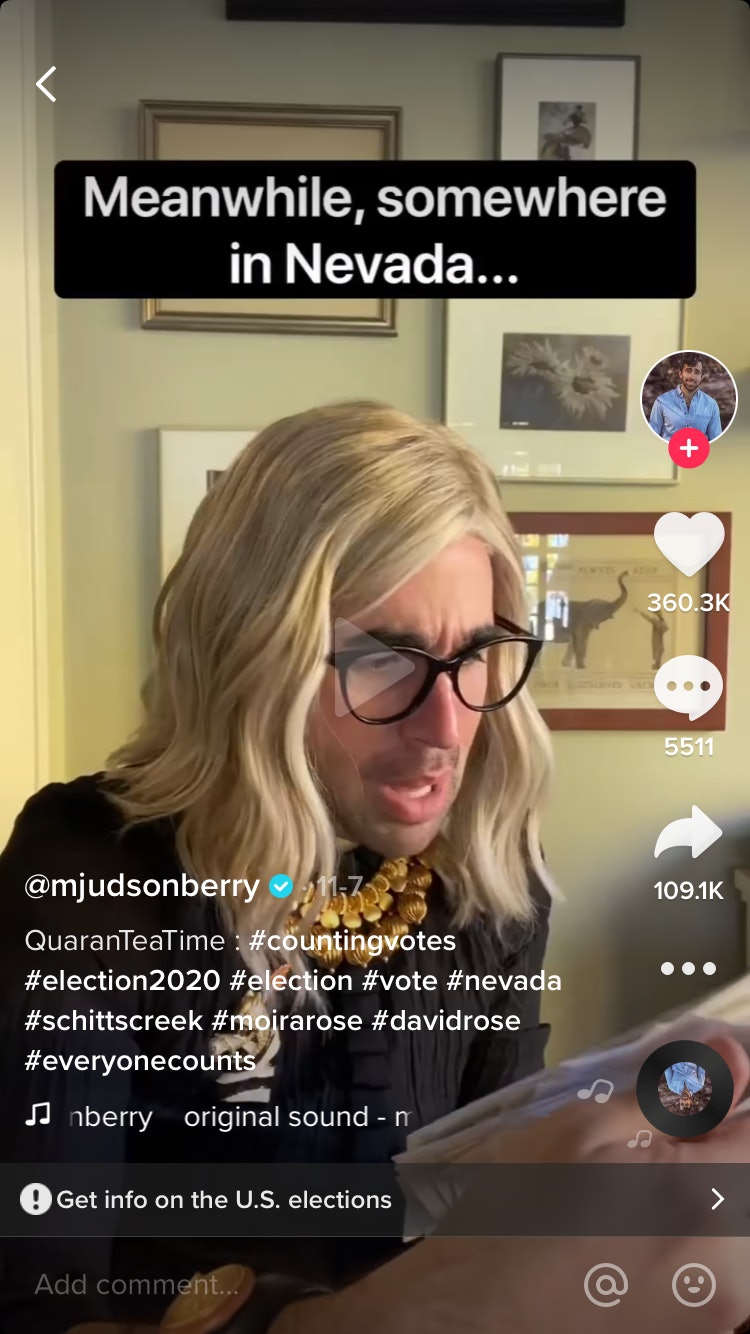 Think: What would Moira do? Apply your favorite characters from the series to real life and act out how they would react to particularly hilarious scenarios. For example, this TikTok mimics Moira and David trying to figure out how to count ballots.

2. This TikTok Is A Total ‘Schitt’s Creek’ Transformation

Don a large pair of sunglasses and some extra bling to recreate this "One Day After Watching Schitt’s Creek" TikTok. Start filming in your normal voice and normal clothes, and repeat "One day after watching." Each time you film, add an extra prop or piece of apparel that speaks to your character of choice. This TikToker ends up in a black and blonde wig and a leather jacket for a total Moira look.

To get the whole house involved, you can each transform into different characters from the show and snap away.

"Therefore I Am" by Billie Eilish is all over TikTok, creating a trend where people lipsync over the lyrics, and then sing solo at the end. Why not take a cue from this TikToker and put a Schitt’s Creek spin on the challenge? You can do your best Moira accent and say, "David, what the hell are you talking about," or impersonate the other characters in the show. 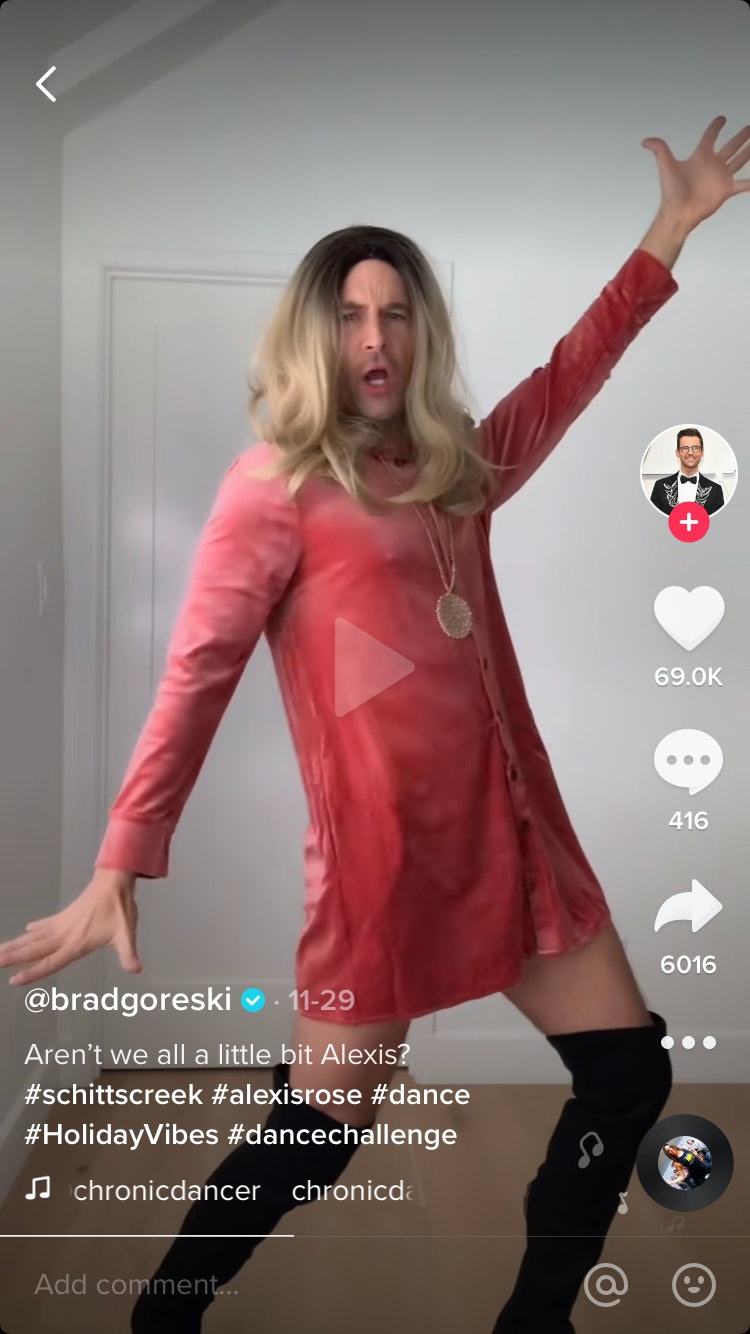 Unleash your inner dancing queen by dancing to "A Little Bit Alexis." Together, you and your housemates can get a little bit silly in your best dresses and recreate Alexis’ dance for an iconic TikTok.

Johnny Rose loves a good bite of cinnamon ooey-gooey goodness, and so do you. Follow this Schitt’s Creek-inspired cinnamon bun recipe to bring the show’s best Dad to life. After you and your roomies finish baking, film your final product with a caption from the show like, "Well, hello everyone, welcome. Welcome. Hope you’re enjoying the cinnamon buns and vodka."

Using the "Fold In The Cheese" sound by Jake Wolfe on TikTok, you and a friend can perfect your David and Moira impressions. Recreate the Moira and David cooking scene by grabbing a mixing bowl, spoon, and any cheese you have on hand. Then, mouth the words to the show. Your followers will be amazed at how much you and your roomie nail the characters.

7. This Alexis Rose Accent Challenge Is Spot On

The #AccentChallenge has been all over TikTok, but it’s time the trend gets a Schitt’s Creek twist. The Alexis Rose challenge recreates the character’s famous lines, like "Ew, David." Perform your best snarky Alexis and have your housemates do the same. Then, let your followers vote on who has the best Alexis accent.

8. This Costume Change Covers The Whole Cast Of Characters

There’s no better way to get into character than by dressing just like them. Take videos of you and your housemates in your everyday clothes. Then, add a snappy transition and film again with each of you dressing as a different character from the show. The costume challenge is the perfect way to show off your love for the series and your great ‘fits, too.