The former psychology professor and author was under fire after he made comments about ‘The Umbrella Academy’ actor’s mastectomy in a now-deleted tweet earlier this week.

AceShowbiz –Jordan Peterson got suspended from Twitter over his post about Elliot Page (formerly known as Ellen Page). The former psychology professor and author was under fire after he talked about the actor’s mastectomy in a now-deleted tweet earlier this week.

“Remember when pride was a sin?” Jordan tweeted at the time. “And Ellen Page just had her breasts removed by a criminal physician,” he added, referring to the “Juno” star who came out as transgender.

Twitter deemed his tweet as a violation to the platform’s rules “against hateful conduct.” The rule reads, “You may not promote violence against, threaten, or harass other people on the basis of race, ethnicity, national origin, sexual orientation, gender, gender identity, religious affiliation, age, disability, or serious disease.”

Following the suspension, Jordan’s daughter Mikhaila took to her own page to slam Twitter over the decision. “Wow. [Jordan Peterson] got a twitter strike. No more twitter until he deletes the tweet,” Mikhaila wrote. “Definitely not a free speech platform at the moment,” she added, while tagging soon-to-be Twitter owner Elon Musk. 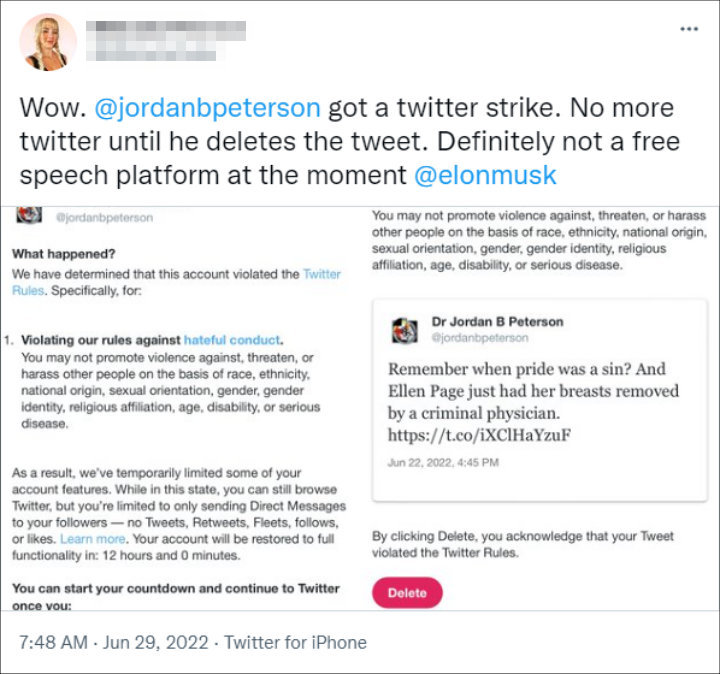 This wasn’t the first time for Jordan to get backlash over his tweet. Prior to this, he was slammed for saying that a plus-size Sports Illustrated model was not beautiful. “Sorry. Not beautiful. And no amount of authoritarian tolerance is going to change that,” he wrote about model Yumi Nu.

“Jordan, this isn’t about you or about beauty at all! You’re missing the point as it’s about acknowledging, accepting, and celebrating all those women in the world who have similar physical archetype. We should all accept and then encourage each other to be our best selves,” one critic said. Another user added, ” ‘Authoritarian’? Chunky women on magazine covers? You sound like a parody of you.”

The backlash prompted him to take a break from Twitter but he returned to comment on a transgender NFL cheerleader.