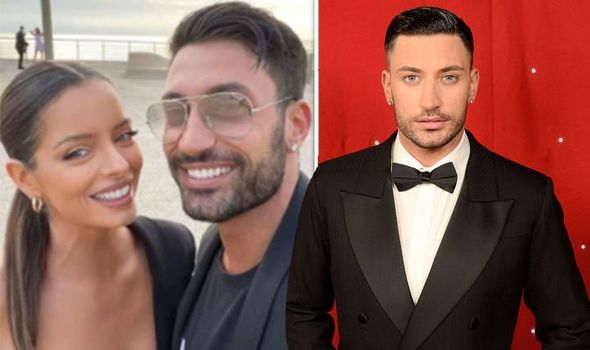 We use your sign-up to provide content in ways you’ve consented to and to improve our understanding of you. This may include adverts from us and 3rd parties based on our understanding. You can unsubscribe at any time. More info

Strictly Come Dancing professional Giovanni Pernice has set the record straight on speculation about his relationship this evening. Earlier this month, split rumours surfaced after he and Maura Higgins removed all traces of each other on their respective social media pages.

Yesterday, The Sun claimed that the professional dancer was seen on the celebrity dating app Raya at the beginning of October.

The source explained: “Giovanni’s profile was on Raya while he was still very much with Maura. It does not state he is just looking for friendship.

“It is clearly for dates and it will be another blow to Maura. Gio said he wasn’t actively using the app but it only takes two seconds to delete.”

A representative for the Strictly star said he became a member of the dating app years ago but was using it while in a relationship.

Tonight, Giovanni set the record straight about the claims in his own words.

In view of his 563,000 followers, the dancer began by thanking fans for voting for him and Rose Ayling-Ellis on the show.

He went on to say: “I just wanted to say a couple of things..

“Firstly, great relationships with great people can come to a natural end.

“This has been the case for me recently. There was absolutely no wrong-doing & this should be the end of any speculation.”

Other reports claimed Giovanni had split from the reality star as he didn’t want to settle down.

The Love Island star is said to be “devastated” by their break-up, however she hasn’t addressed the news publicly.