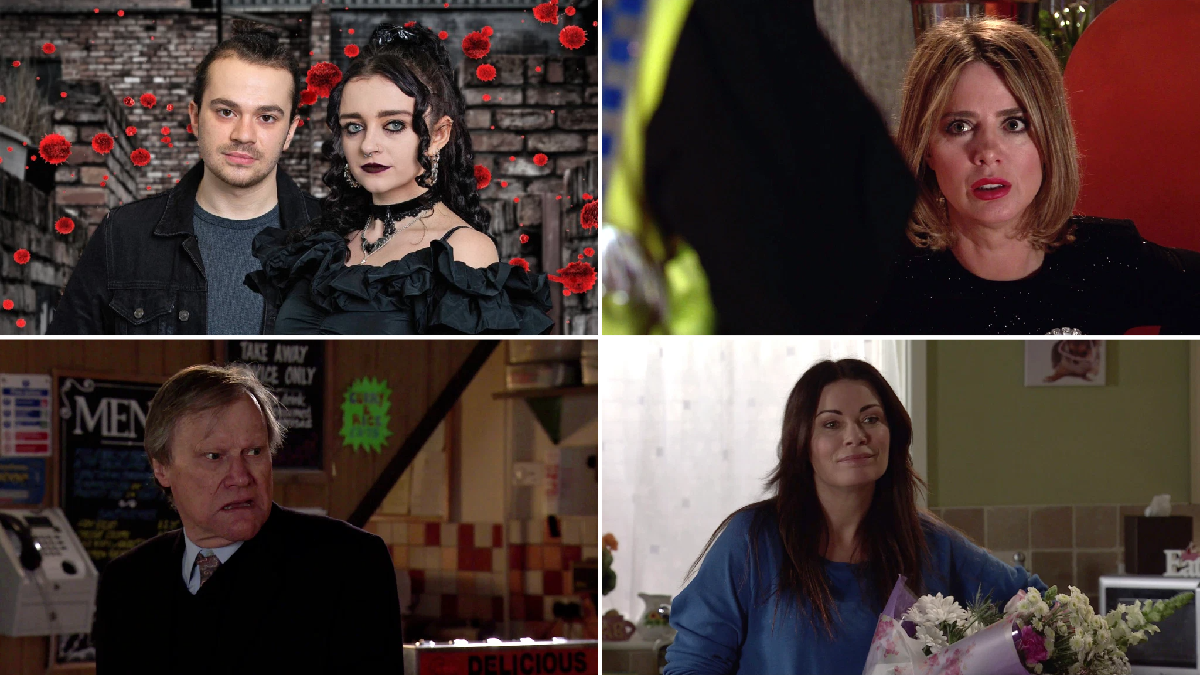 It’s a week that will change the lives of many in Coronation Street – not least of all the teen cohort – when Nina Lucas (Mollie Gallagher) and Seb Franklin (Harry Visinoni) are subjected to a horrendous attack, triggered by hatred and prejudice towards Nina’s sub-culture.

As they fight for life, they aren’t the only youngsters in danger either, as Sharon Bentley (Tracie Ann Bennett) closes in on Simon Barlow (Alex Bain). Is there any escape?

Monday May 3 Part One

Nick and Leanne are unaware that Simon has given their address to Peter, so they are convinced they are safe.

Having been told about Peter being discharged, Harvey’s heavies watch Carla and Peter meet in the car park. They see Peter show Carla the address of the hide out and follow them. Is the game up for Nick and Leanne?

Meanwhile, Abi assures Kevin that nothing will spoil their day despite him falling out with Tyrone, but her day goes from bad to worse with a series of setbacks sending her stress levels through the roof.

Elsewhere, as Nina and Seb scour the internet for a suitable necklace for Abi on her wedding day, Seb makes a light hearted comment about buying her an engagement ring. Roy’s troubled.

Also, when Asha suggests another evening in with a box set, Corey’s unimpressed and announces that he’s off out to meet his mates. Corey meets up with Kelly in Speed Daal. Nina watches as they openly flirt with each other.

At the hideout, Nick reassures Leanne and Simon that once Harvey has been sentenced, they’ll be free to return home.

Sharon calls at Number 1 with flowers for Peter and manages to get Carla’s phone. Having found the address of the hideout, Sharon slips the phone back in Carla’s bag and leaves. Carla remains oblivious.

Sharon calls Harvey’s heavy with the address and orders him to head over there sharpish.

Seb suggests to Nina that perhaps they’ve taken things too quickly and he should move back out. Nina is taken aback and questions his feelings.

Tyrone calls at the garage and tells Kevin that he will be his best man after all.

Wednesday May 5 Part One

It’s the day of the hen and stag parties. Sally has arranged dinner at the bistro for the hens, while Kevin’s stags are heading for Speed Daal.

Seb is delighted when his mum asks him to give her away and presents her with the necklace. In the Bistro, Abi tells her friends that she has never felt so happy.

Over at the flat, Corey tells Asha that he is going out again and heads out to meet his mate Eli, who pulls up in a stolen car. Desperate not to let him down, Asha jumps in the car along with Kelly and Summer.

Stopping at some wasteland, they get out the beer and turn up the music. Asha and Summer are horrified to discover the car is stolen, and as Kelly berates them, Corey joins in. Devastated Asha heads home, meeting Amy on her way back to the street.

A loved-up Nina and Seb are walking along the canal when they come across the gang. When drunken Eli and Corey start making nasty jibes at Nina, Summer becomes uneasy and heads home.

Egged on by Eli, Kelly slaps Nina across the face. As Seb and Nina hurry away, the gang gives chase and they find themselves subject to an unprovoked and vicious attack

The stags and hens continue their celebrations. They’re oblivious to what has gone on, until the police arrive on the street to break the devastating news that Nina and Seb have been attacked.

In the hospital, the nurse explains to Roy how Nina sustained several blows to her head and is currently undergoing an operation.

As a horrified Abi takes in the extent of Seb’s injuries, the doctor assures her they’re doing everything they can and they’re hopeful he’ll make a full recovery.

Meanwhile, Kelly returns home and does her best to mask her terror. Realising she’s drunk, Imran and Toyah tear a strip off her and order her to knuckle down.

Asha returns home from Amy’s to find Corey already there. Corey lies, making out he has been home for ages and was worried about her.

Aadi calls at Asha and Corey’s flat and tells them how somebody beat up Seb and Nina and they’re now in hospital. Asha reels, while Corey acts shocked.

Friday May 7 Part One

The doctor explains to Abi that they’re going to run some tests on Seb. Worried sick, Abi asks Kevin to cancel their wedding. As Kevin hurries out, Abi listens to the voice message Seb left shortly before he was attacked. An emotional Abi tells Seb how much she loves him as he’s wheeled away for his scan.

Nina regains consciousness and tells Roy and Abi that all she can remember of the evening was seeing Corey and his mates. Spotting Corey and Asha outside their flat, Abi steams over, demanding some answers.

Corey covers his tracks by telling Kelly to say nothing. Hearing Summer is suspicious, he tells her to keep quiet, threatening that he will tell Billy she was in a stolen car.

Asha is shocked by the attack, oblivious to Kelly and Corey’s involvement.

Corey assures Abi that he knows nothing about the attack and he’s as shocked as she is. When he makes out that he has always got on well with Nina, Asha is perplexed.

Corey swears to Asha that he’s entirely innocent, but it would be best if she tells the police that he was with her all evening. Asha’s unease is palpable. What will she do?

Meanwhile, the police question Nina. Nina recalls how she and Seb went for a walk and came across Corey and Kelly, but she struggles to remember anything about the attack.

Elsewhere, the doctor tells Abi that Seb’s tests were inconclusive so they’re going to repeat them. Abi does her best to remain positive.

If you’ve got a soap or TV story, video or pictures get in touch by emailing us soaps@metro.co.uk – we’d love to hear from you.

Join the community by leaving a comment below and stay updated on all things soaps at our homepage.