Elon Musk has become embroiled in a Twitter spat with Ukrainian President Volodymyr Zelensky after claiming the country should remain ‘neutral’ in the war against Russia – as a diplomat told him to ‘f*** off’.

The Tesla CEO made a series of remarks, claiming he only wanted ‘peace’ between the countries after Russian invaded Ukraine unprovoked eight months ago.

He claims the peace deal should include a recognition that Crimea, which was illegally annexed by Russia in 2014, is ‘formally a part of Russia.’

Crimea has been recognized as a part of Ukraine by the US and other allies since Russian invaded and conducted a referendum.

The world’s richest man acknowledged that the referendum was ‘questionable’, quickly hitting back to say it should be done under the supervision of the UN or another ‘trusted entity’.

Billionaire Musk has been hit with a huge backlash online, claiming his ‘peace’ deal is ‘highly likely to be the outcome’, adding ‘just a question of how many die before then.’ 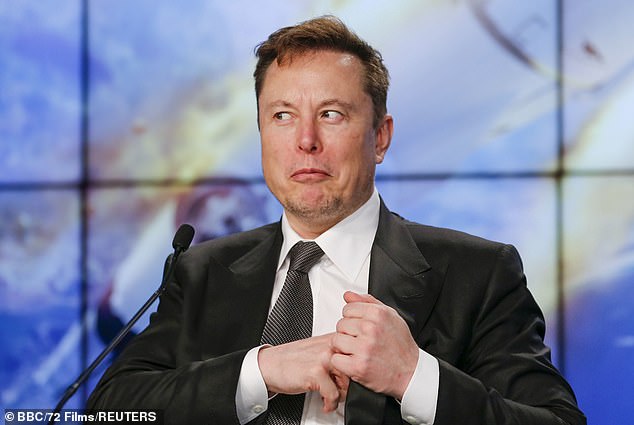 The Tesla CEO’s posts struck a nerve, with diplomats and even Ukrainian President Volodymyr Zelensky becoming involved in the online row 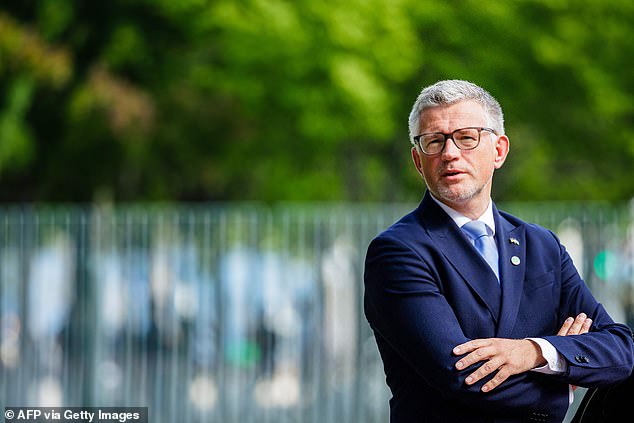 Ukraine’s Ambassador to Germany Andrij Melnyk, pictured, told Musk to ‘f*** off’ in response to his series of Tweets

Ukraine’s Ambassador to Germany Andrij Melnyk slammed Musk, replying to his suggestions online saying ‘F*** off is my very diplomatic reply to you.

‘The only outcome is that now no Ukrainian will every buy your f***ing Tesla crap. So good luck to you.’

Musk posted a poll asking other Twitter users to weigh in on his suggestions, in which he also said elections of annexed regions should be redone under UN supervision.

More than a million people voted in just four hours, with the result being closer than his peace deal poll – which saw nearly two million vote in the same time period.

His other ideas were that water supply to Crimea is assured, but after thousands voted against them he blamed a ‘bot attack’ for skewing the results.

President Volodymyr Zelensky hit back at the series of posts, creating his own poll asking ‘Which Elon Musk do you like more? One who support Ukraine or one who supports Russia.’

Almost a million people responded, with the overwhelming majority voting for one who supports Ukraine.

Musk told his followers he believed that nuclear war is an ‘unlikely’ but ‘possible’ outcome.

He added: ‘Russia is doing partial mobilization. They go to full war mobilization if Crimea is at risk. Death on both sides will be devastating.

‘Russia has >3 times population of Ukraine, so victory for Ukraine is unlikely in total war. If you care about the people of Ukraine, seek peace.’ 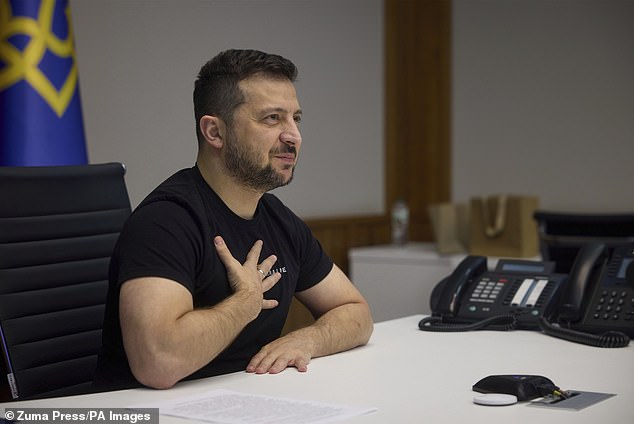 President Volodymyr Zelensky hit back at the series of posts, asking people if they preferred a Musk who supported Ukraine or Russia 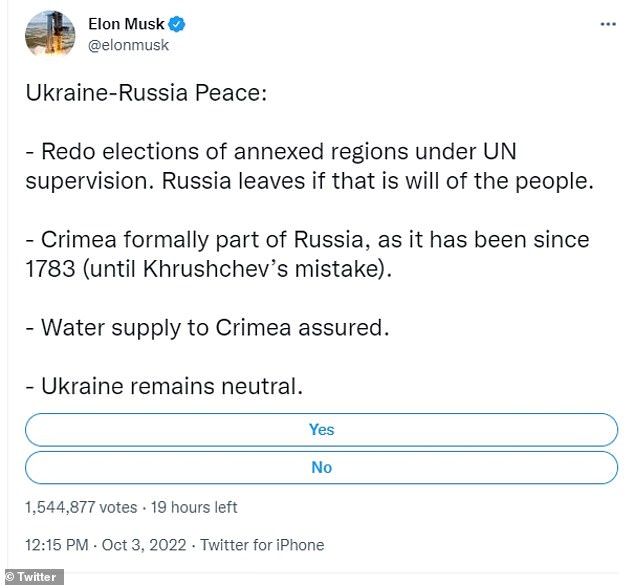 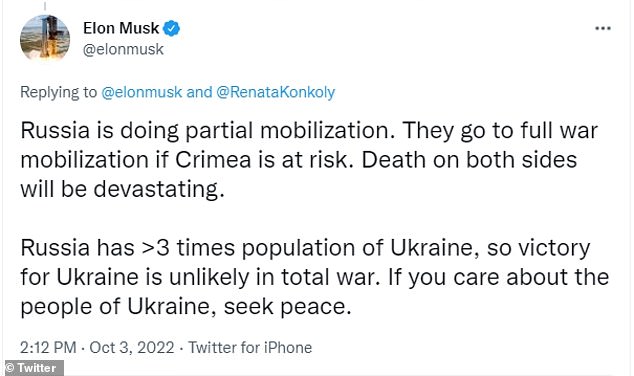 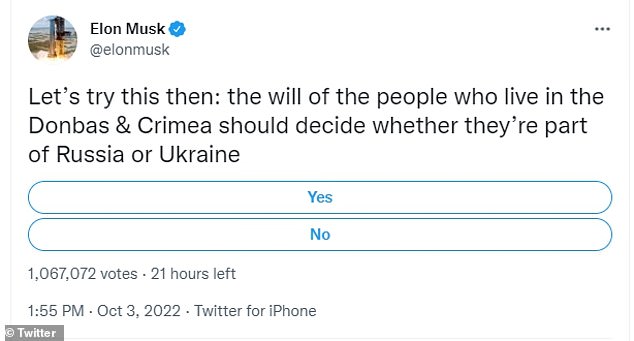 Ukrainian and Russian officials held peace talks at the start of the war, with Russians demanding that Ukraine remained ‘neutral and recognize Crimea as Russian.

Both of those suggestions were identical to Musk, with their proposals also including commanding Ukraine to demilitarize.

However Ukrainian forces defended against the invasion, meaning that the talks fell apart after they beat back Russian troops.

President Biden’s administration has also pointed out that the war could end if Russia stopped the invasion and retreated.

But if Ukraine backed off then it would lead to Russia killing more Ukrainian’s and continuing their goal to take over the country.

Russia has held sham referenda in four regions of Ukraine in the past week, trying to illegally annex them.

Speaking last week, President Zelensky said there is no way to try to have productive talks with Vladimir Putin.

He said: ‘Russia’s implementation of the so-called Crimean scenario and another attempt to annex Ukrainian territory will mean that there is nothing to talk about with this President of Russia.’