Home of the girl with the kaleidoscope eyes? Historic Surrey antiques shop which inspired The Beatles hit song ‘Lucy in the Sky with Diamonds’ goes on the market for £1.4million

An antique shop fabled to have once been the home of the real-life Lucy from The Beatles’ song Lucy in the Sky with Diamonds has gone on the market for £1.4million.

Grade II listed Church House Antiques is one of the oldest shops in the market town of Weybridge, Surrey, and dates back to the reign of Charles II.

The three-bedroom home offers 4,000sq ft of space with a shop showroom, courtyard garden and a studio. It was frequented by John Lennon and his family in the sixties among a host of other celebrities.

Legend has it that while they were playing, Julian drew a picture of a girl surrounded by diamonds and showed it to his father.

Lennon is said to have later gone into the shop and said, ‘Hello Lucy in the sky with diamonds’. The comment baffled the family but they were amazed when The Beatles’ 1967 hit song came out.

Mary Foster, 74, Lucy’s elder sister and the current shop owner, said: ‘Julian went to school just round the corner from here and he was very homesick so they would call Lucy out of class to sit with him and draw.

‘John Lennon came into the shop one day and said, “Hello, Lucy in the sky with diamonds”. My father just thought he had gone bonkers, it wasn’t until later the song was released.’ 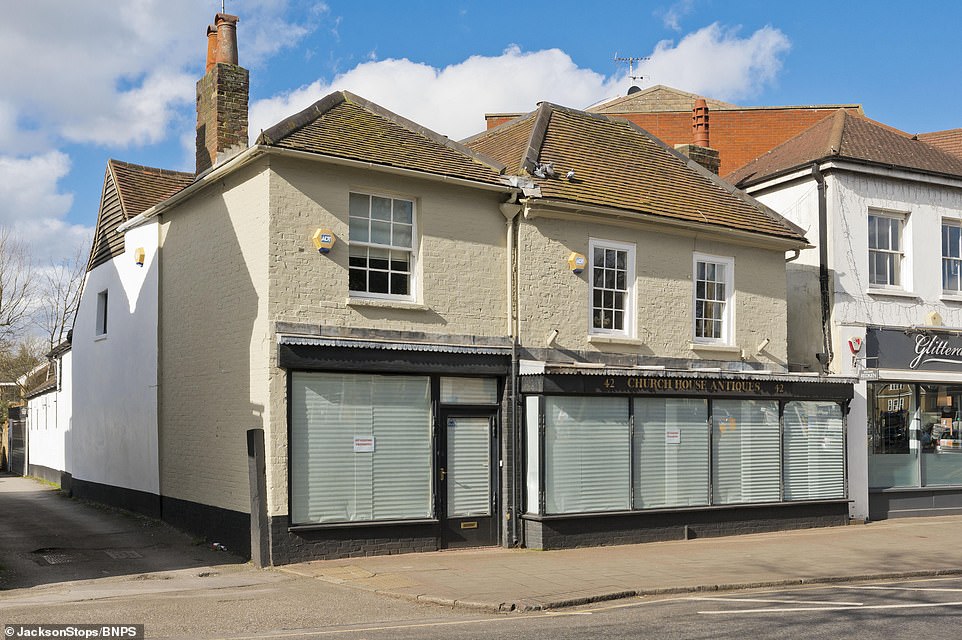 Church House Antiques is one of the oldest shops in Weybridge, Surrey, with a history dating back to the reign of Charles II, and is on the market for £1.4million 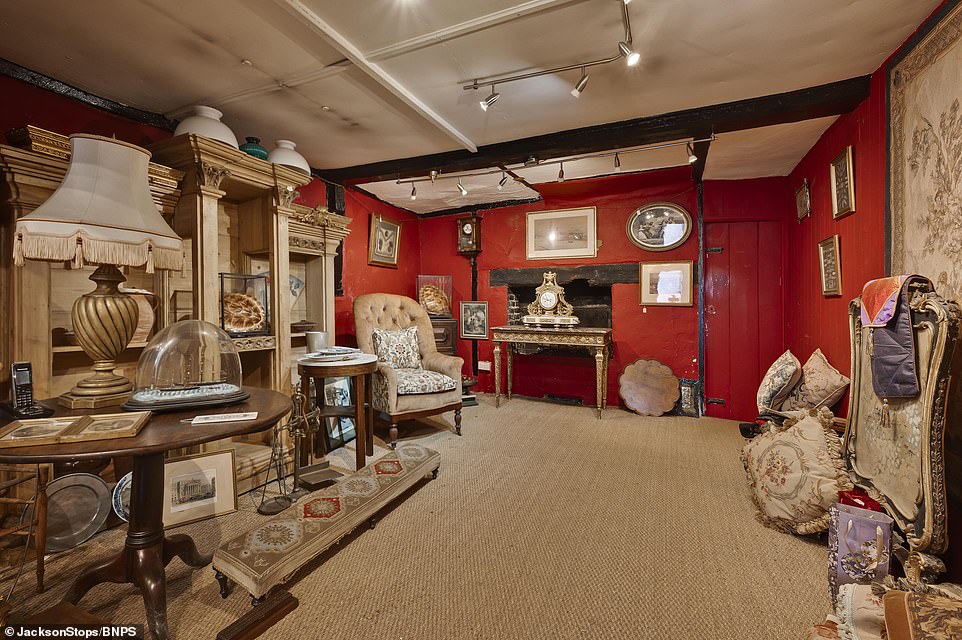 The shop is over 360 years old and has been visited by scores of celebrities over the years, including The Beatles 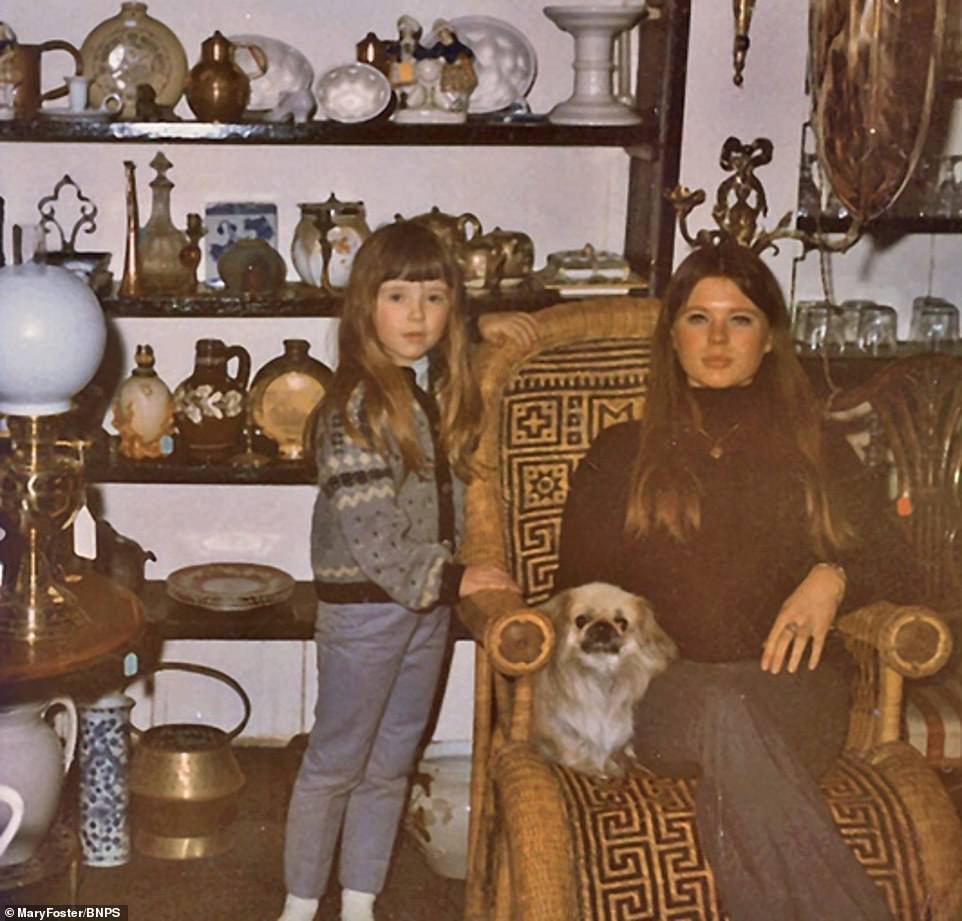 A 1966 picture of Mary in a chair, which she later sold to John Lennon, sitting next to her younger sister Lucy who was friends with Lennon’s son Julian and believed to be the inspiration for the song Lucy in the Sky with Diamonds 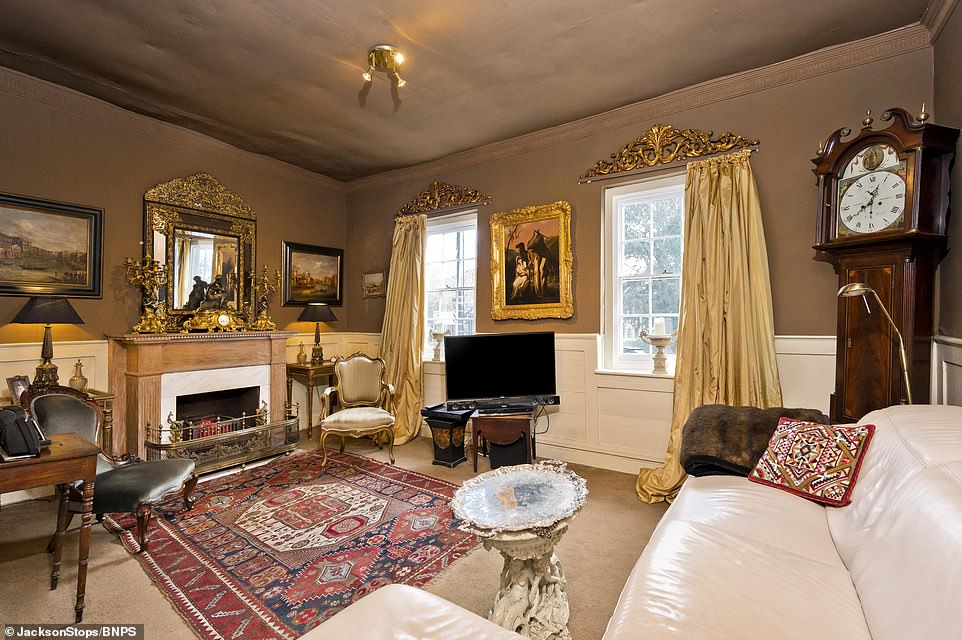 Mary Foster has run the antique and jewellery store for more than 50 years and lived in the property, but she decided to close the shop last year due to the impact of the pandemic (Pictured: The sitting room) 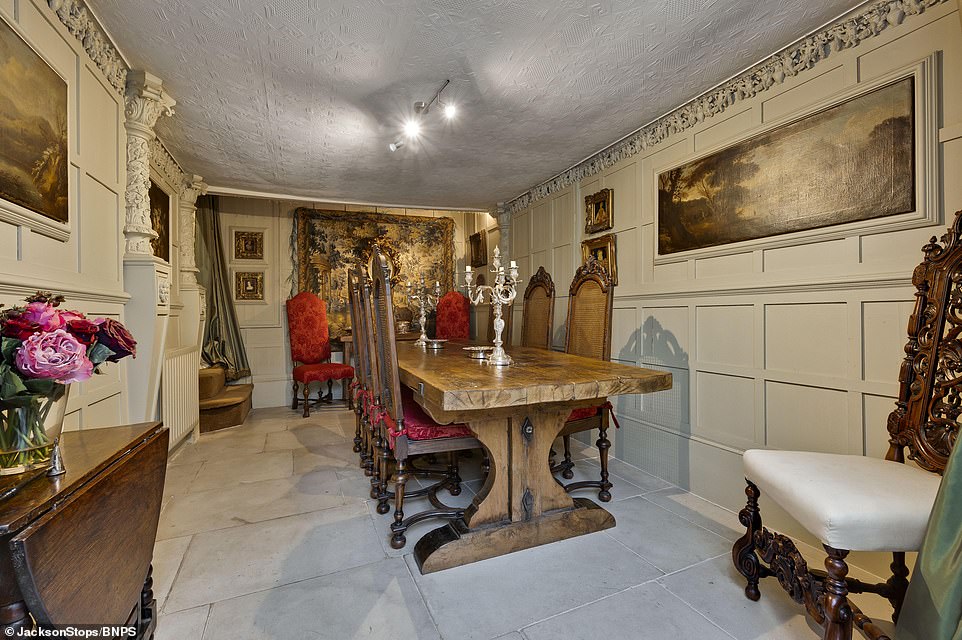 Potential buyers may be interested in its recent history, as the shop was popular with John Lennon, Tony Curtis and Joan Collins (Pictured: The dining room) 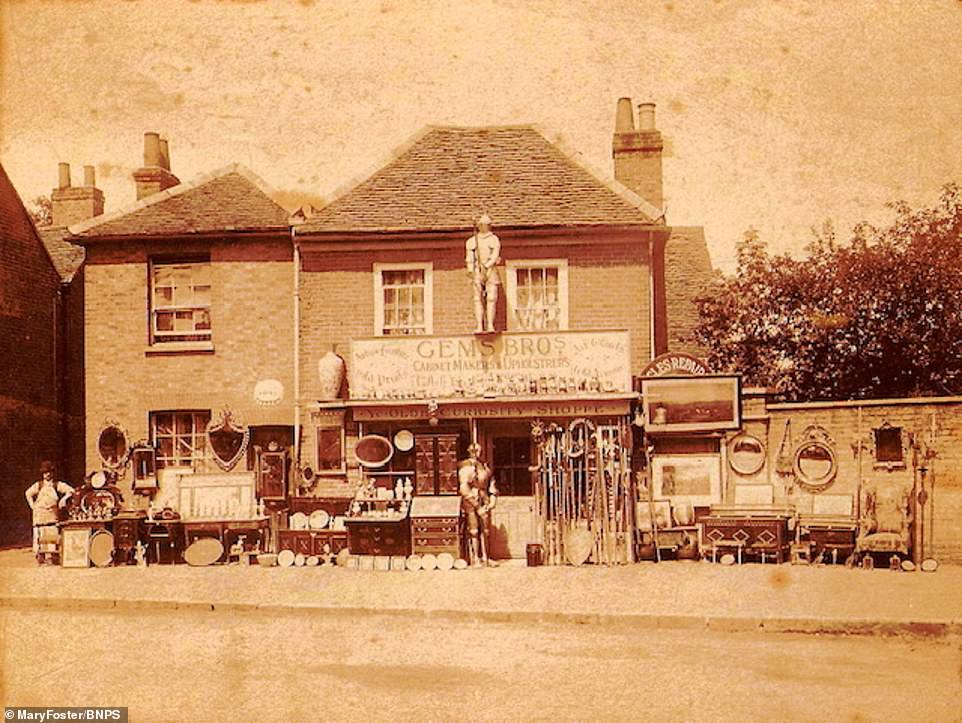 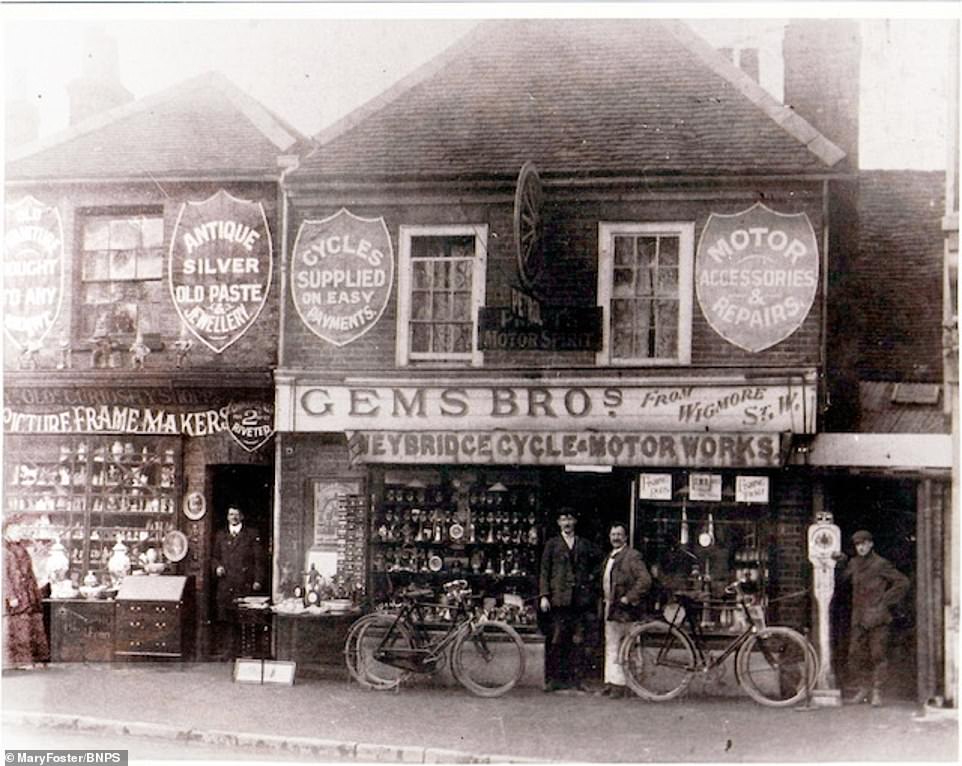 Alongside antiques, the shop was one of the first in the area to sell cycle and motor parts (pictured here in the 1900s). 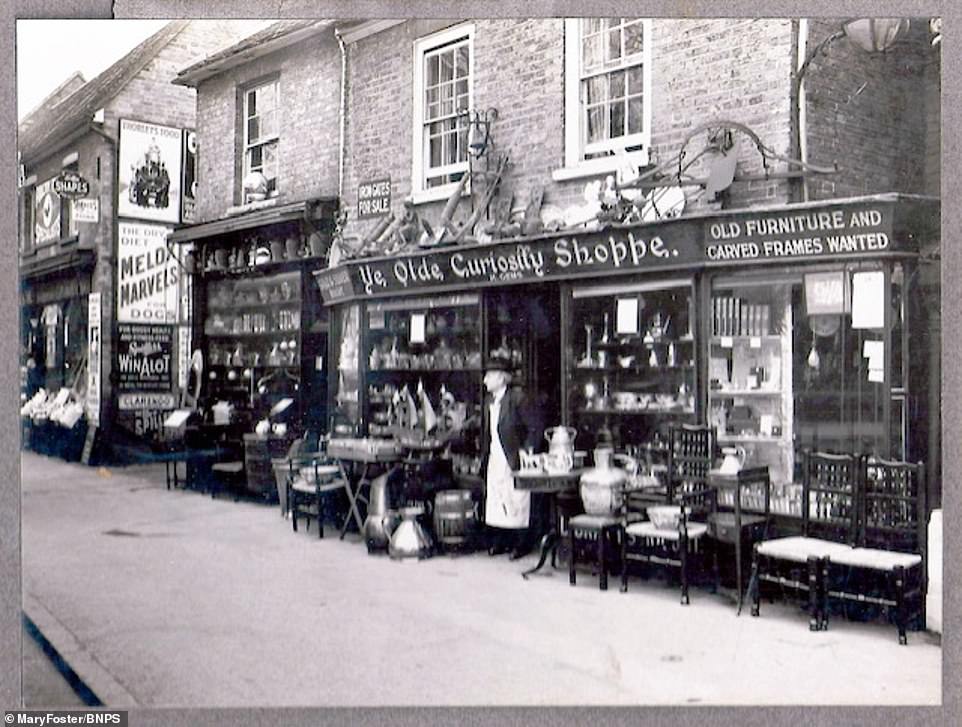 The shop, pictured here in the 1930, is the oldest antiques business in Weybridge, 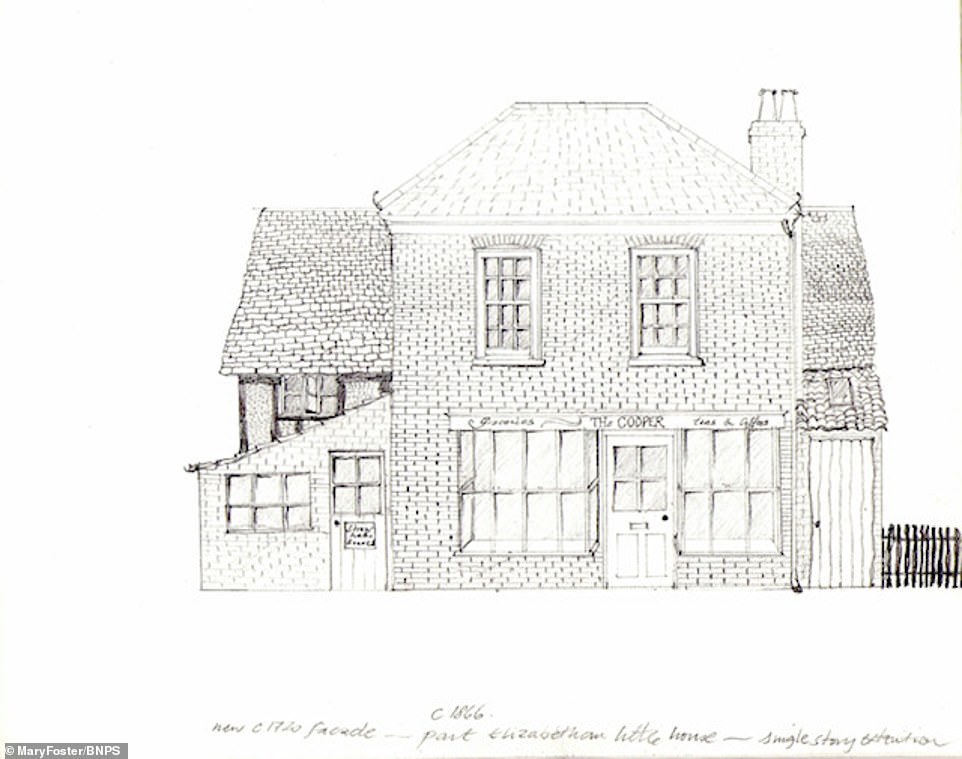 A pencil drawing of the building dated 1866 showing the facade of the shop, then named The Cooper 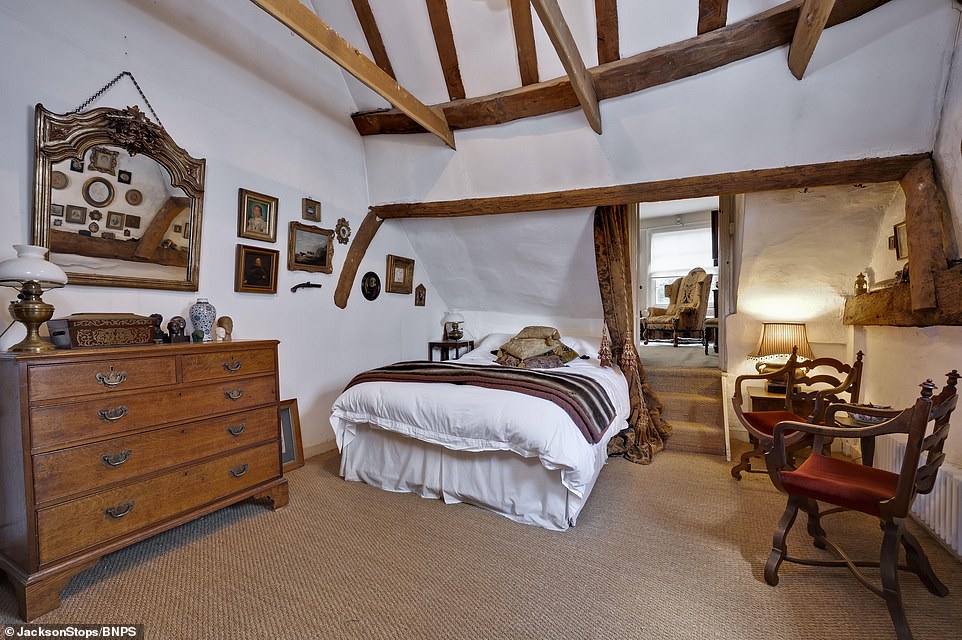 One of the home’s three bedrooms is awash with character, including a beamed ceiling and short stairwell 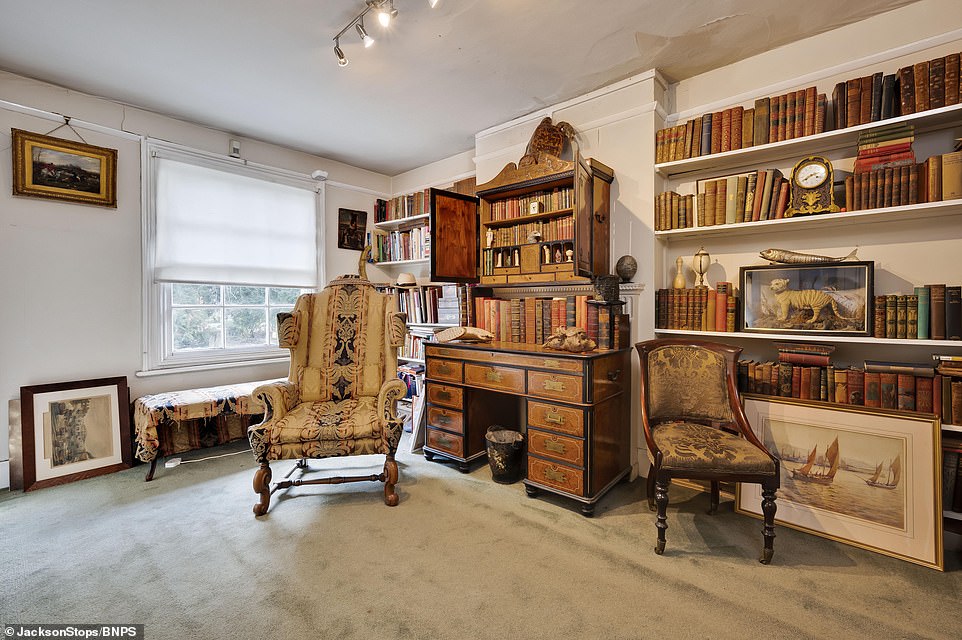 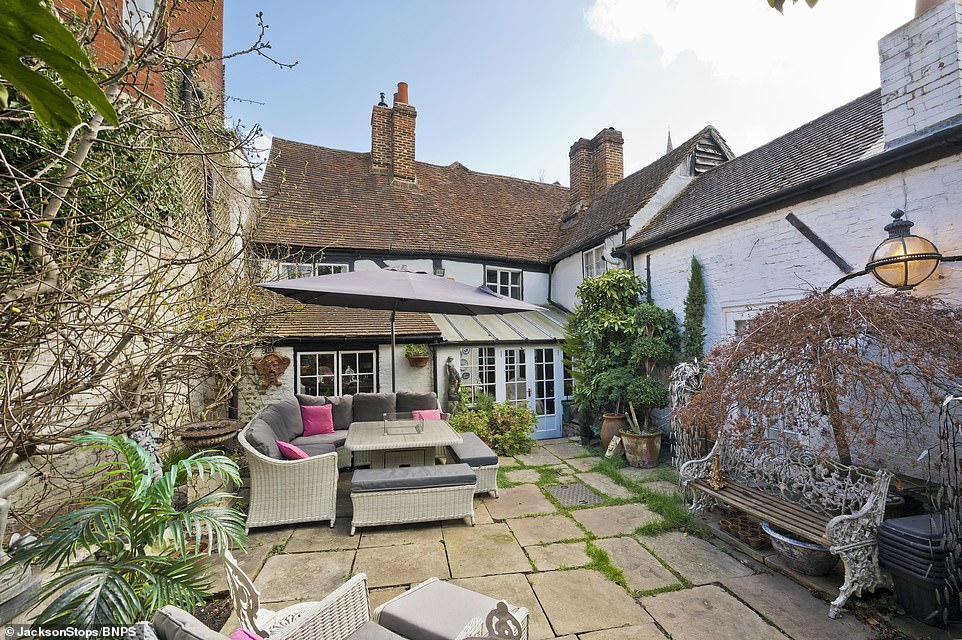 Another Lucy in the Sky with Diamonds?

There is another Lucy that has also been rumoured to be the real-life inspiration behind the 1967 song.

One day, he is said to have unwittingly uttered the song’s title on returning home from nursery.

His father heard him and used his words to write the song.

Mrs Foster has run the antique and jewellery store for more than 50 years and has lived in the three-bedroom house behind.

But she decided to close the shop last year due to the impact of the pandemic and is now selling the property, marketed by agent Jackson-Stops.

Mary moved there in 1965 with her father Leslie Richardson and the rest of her family.

She regularly welcomed famous faces and has many fascinating stories including being asked out by Adam Faith while his wife was in the shop and jokingly getting bundled into John Lennon’s Rolls Royce when she helped him load a table he had bought.

Mrs Foster said: ‘I was 17, coming on 18. My role was to look after the shop because my parents both worked in town.

‘Some of the celebrities we had lived locally – John and Ringo both lived in Weybridge. I met Cynthia Lennon and Julian before I met John.

‘This lady came in with her little boy and I had my sister Lucy with me who was about six at the time. Julian developed quite a crush on Lucy and they would play together whenever they came into the shop.

‘Adam Faith asked me out for dinner while his wife was in the front of the shop chatting to my parents. It was quite flattering but I thought that’s a bit naughty.

‘Once there was an antique dealer in the shop with me when this couple walked in wearing sunglasses. She said ‘perhaps you better go watch them’ thinking they looked suspicious – it was Ringo and his wife Barbara Bach.

‘I closed the shop last year, it just got a bit much with all the lockdowns and everything. The family have all grown up and moved on so it’s time but I shall cry my eyes out when we leave. 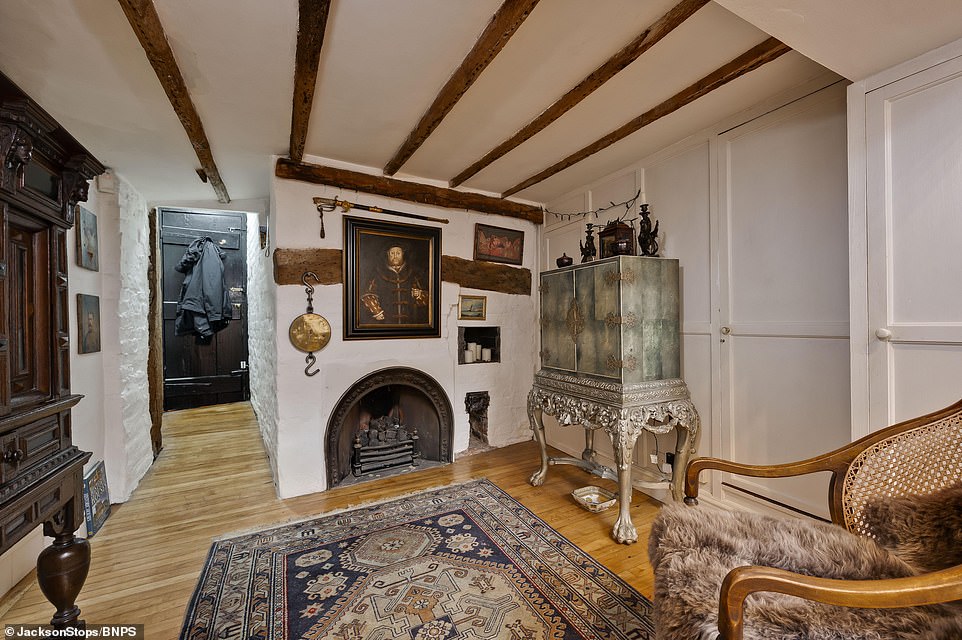 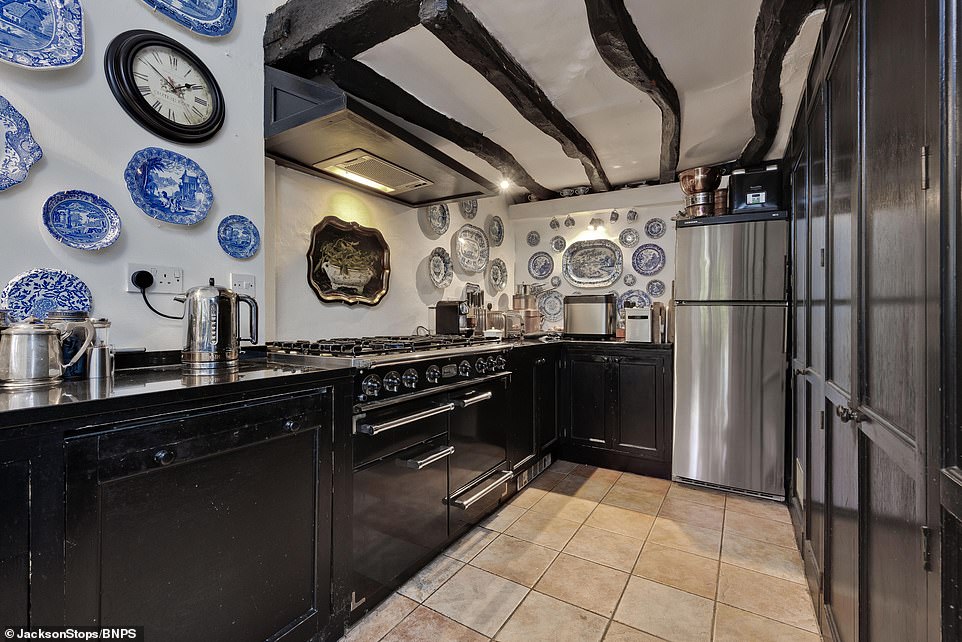 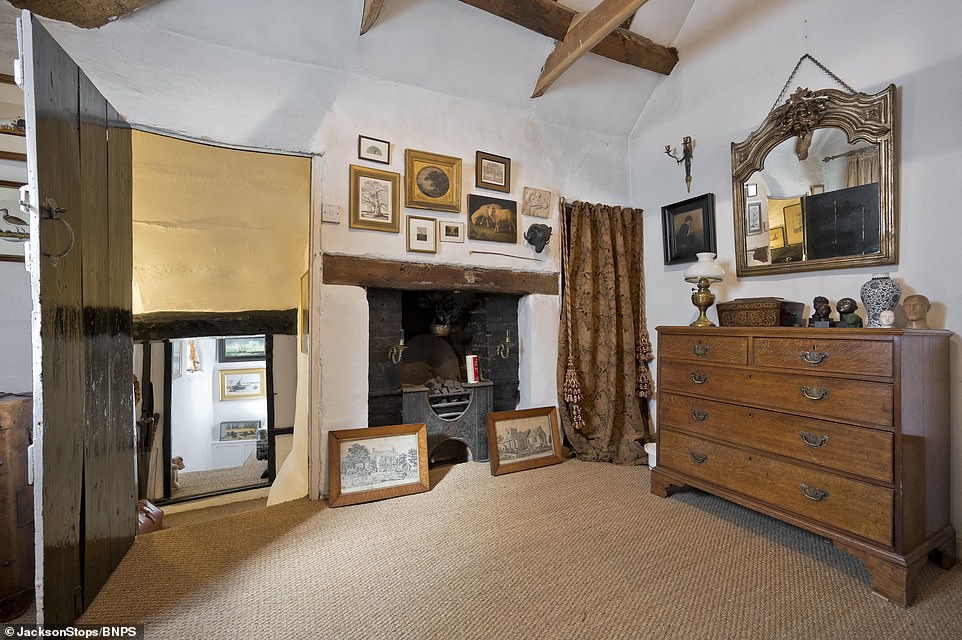 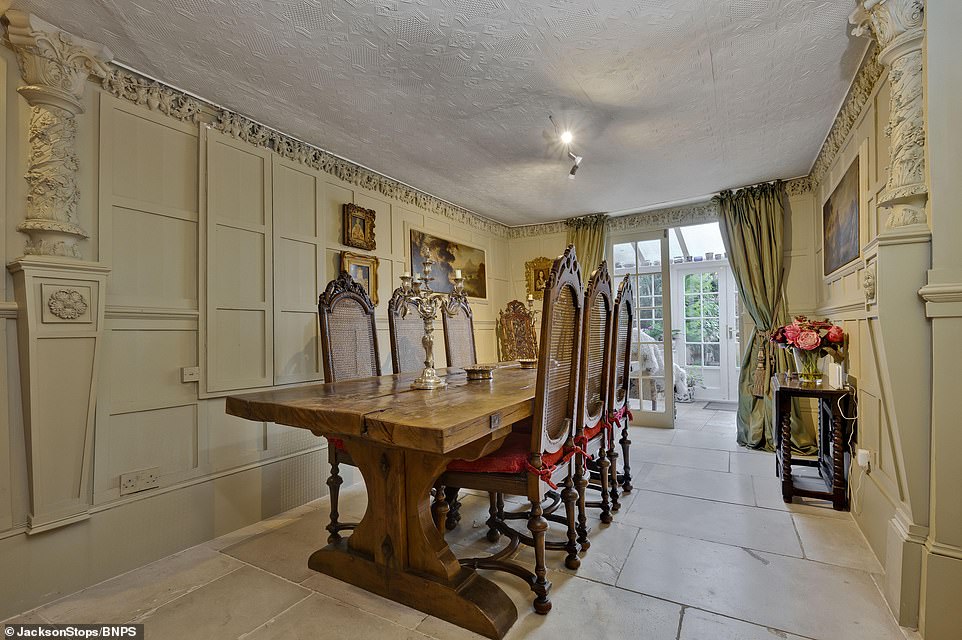 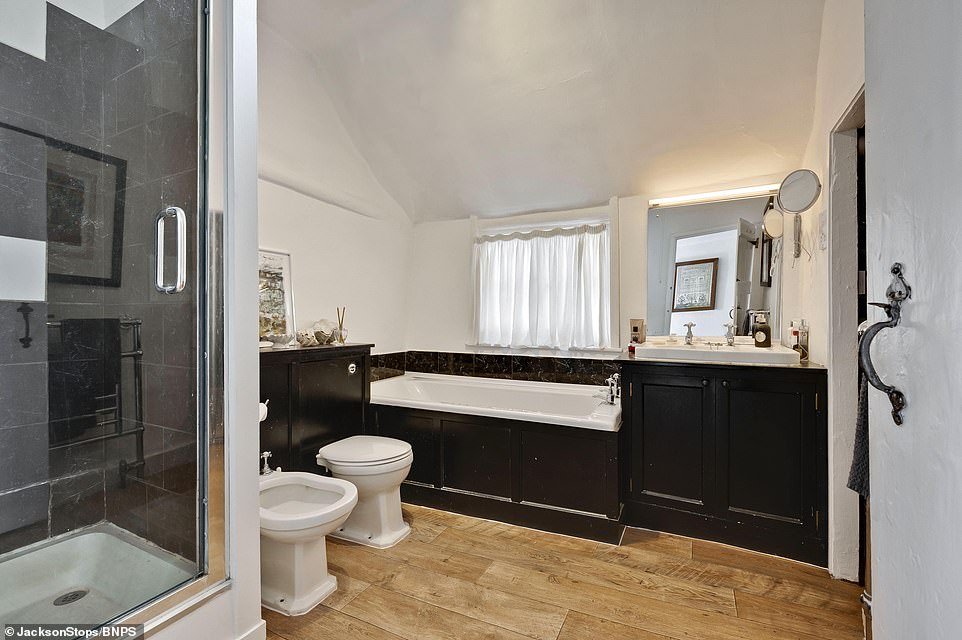 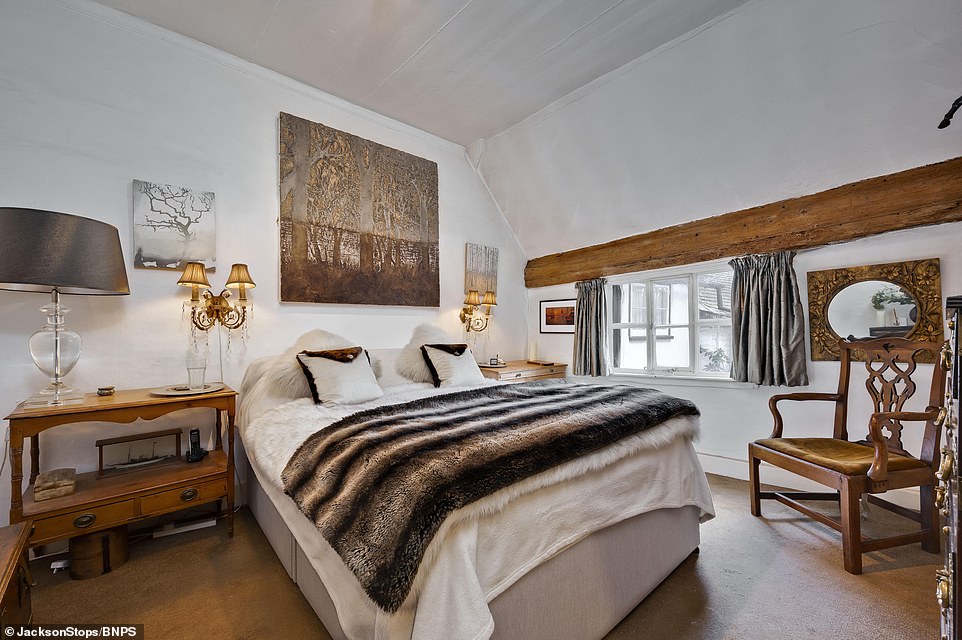 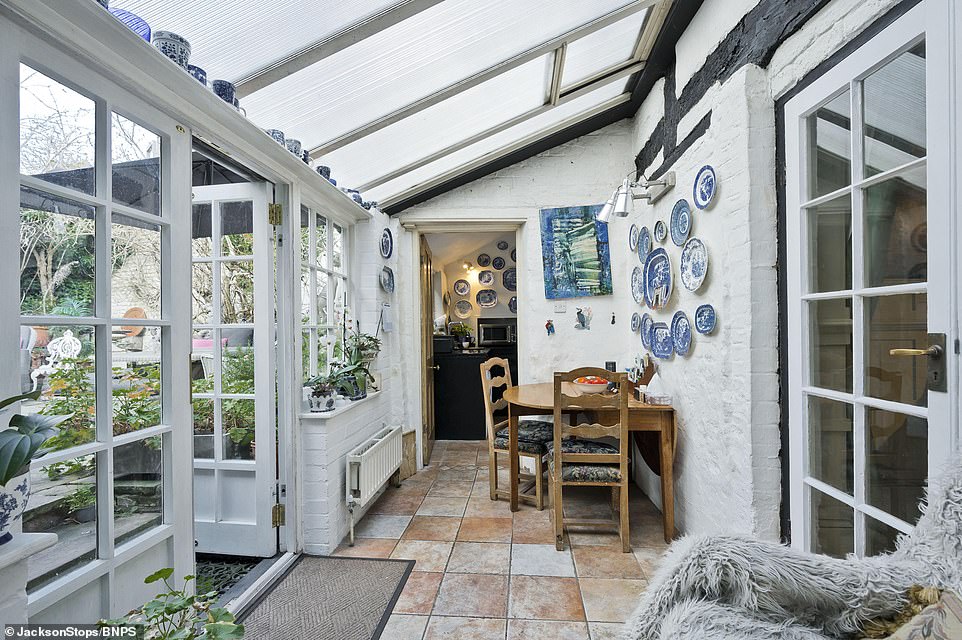 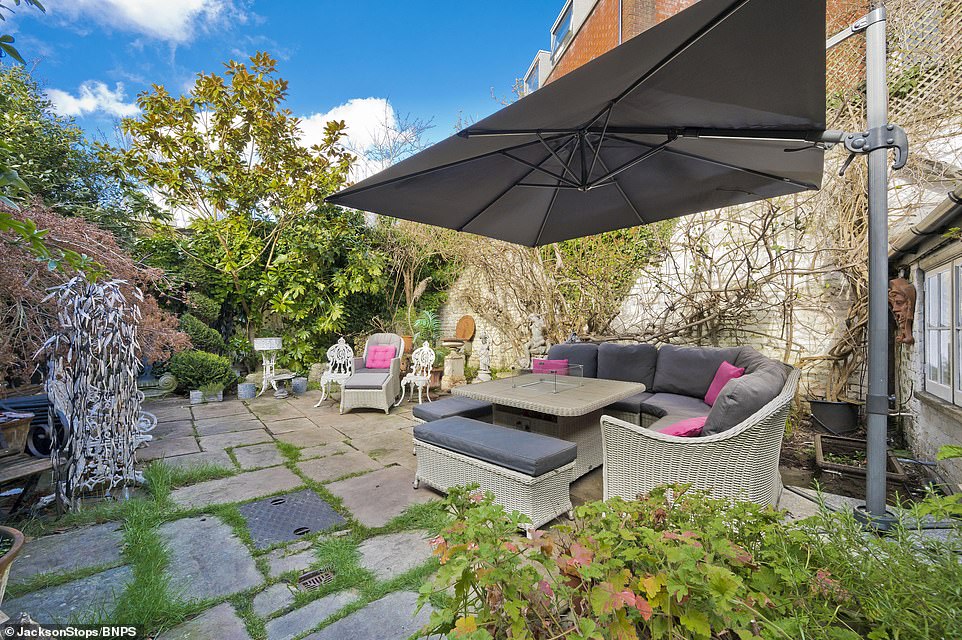 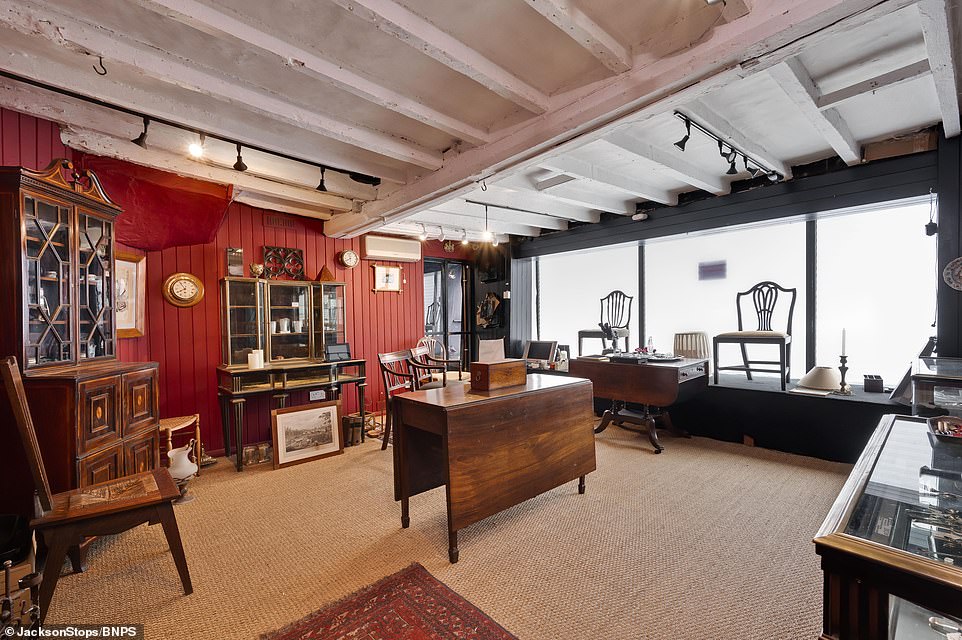 ‘The house is lovely, warm and welcoming. It doesn’t look like much from the outside, it looks like a a little shop with a flat over it, but when people come in and walk around they say it’s like a Tardis.’

Behind the panelled store room, the house has a kitchen, dining room, conservatory and drawing room on the ground floor, with three bedrooms, a dressing room and two bathrooms on the first floor and an office on the top floor.

There is also a courtyard garden and a garage and studio at the back.

Tim Firth, director of agents Jackson-Stops Weybridge branch, said: ‘The property is an eclectic offering of residential and commercial usage in the heart of the conservation area, in the middle of Weybridge High Street.

‘Sitting in the wonderful town of Weybridge, just a two-minute drive from the train station, the home is positioned excellently for countryside living just a short distance from the hustle and bustle of the capital.’