The British music industry faces a bitter split as representatives of the country’s biggest record labels oppose the appointment of Tom Watson as chairman of an influential group.

The former Labour deputy leader was named the boss of UK Music on a reported salary of £60,000 for 40 days’ work a year.

His appointment alarmed the British Phonographic Industry (BPI), whose members account for 85 per cent of music sales.

Opponents complain that Mr Watson lacks sufficient knowledge of the music industry and have highlighted his support for false allegations of child sexual abuse. Victims of false claims have included Sir Cliff Richard. 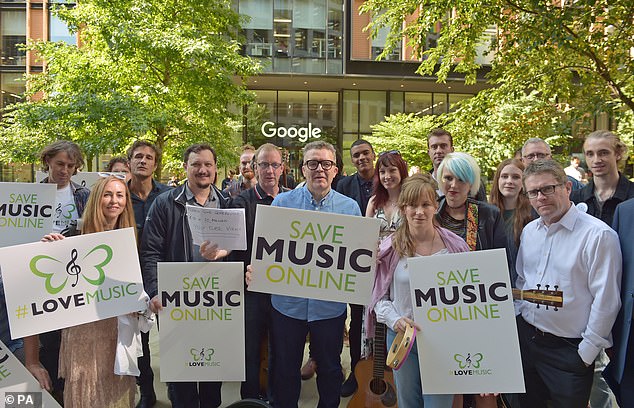 Tom Watson (centre) with some of his supporters including Crispin Hunt (third left) protesting outside Google in King’s Cross, London. Important music industry figures have opposed UK Music’s appointment of Watson as chairman

Deputy chairman of the BPI and singer-songwriter Mike Batt published a letter on his website arguing that Watson has too many enemies in the government to be able to represent the music industry to them.

Tom Watson claimed in Parliament that he had seen ‘clear intelligence suggesting a powerful paedophile network linked to Parliament and No 10.’

Two years later he met with Beech, 51, who could therefore brag to police that Mr Watson was his confidante, protector and a key part of a ‘little group supporting me’ as he made baseless claims of sexual abuse and murder in Westminster.

But last year these claims were destroyed after Beech was convicted of 12 counts of perverting the course of justice and one of fraud.

Mr Watson said previously: ‘I met the man I knew as ‘Nick’ once, on 8 July 2014, two years after I had raised my question in Parliament. During that meeting Nick said very little and did not name any of his alleged abusers.

‘I reassured Nick that the police had made clear that all allegations of historic sex abuse would be taken seriously and treated sensitively.

‘It was not my role to judge whether victims’ stories were true. I encouraged every person that came to me to take their story to the police and that is what I did with Nick.’

‘If Mr Watson remains as chairman I would urge the BPI to leave,’ said Batt.

Former president of EMI Classics and Jazz Richard Lyttelton said Watson was not qualified and said UK Music was putting cronyism ahead of the industry’s reputation.

Watson’s support has largely been from within UK Music many of which are connected with the Labour party.

They have a political history together with Dugher’s career in the Labour party and his appointment by Watson to head an enquiry into fake news in 2016.

UK Music’s founder, who has supported Watson’s appointment, accepted the BPI’s position and urged them to stay members of UK Music.

Andy Heath said: ‘The BPI has always been transparent about their opposition to the appointment of Tom Watson and that is completely fair.

‘This opposition was not taken lightly and the board debated at length in the hope that unanimity might be achieved.

‘Everyone involved with UK Music is very keen and will work desperately hard to ensure that the BPI remains an active member.’

UK Music has denied that Watson earns £60,000 but will not reveal his salary, the Times reported.